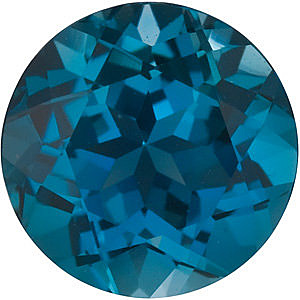 Speaking about the London Blue Topaz, it is one of the highest-priced and elegant quality shades of the blue topaz, the other two being the sky blue and Swiss blue topaz. London blue gemstone is a medium to dark grayish-blue color that appears to be slightly greenish if seen from a different angle. The intense color, brilliant luster, and clarity of this gem make it a special one.

It is typically produced by the process of heat radiation in a nuclear reactor. When topaz is exposed to fast neutrons, the radiation changes the color centers, resulting in the fancy deep blue color. It is further treated into heat treatment to lighten the inky color, and the process goes on until the required shade is obtained.

Since the material becomes highly radioactive through the treatment, it is stored for several months so that the radioactivity decays to safe levels and does not harm the users. Complete strictness is ensured to protect not only the end-user but also those who work in the industries to make these gems a masterpiece.

The heat treatment and radiation used to produce the blue color in topaz is permanent, that cannot fade with exposure to light. Topaz has one direction of perfect cleavage that can possibly separate if it is exposed to poor handling and rough usage. It contains liquid-filled inclusions that can cause a gemstone to fracture when heated up. So, this stone should be cleaned carefully with lukewarm soap and water while avoiding harmful chemical cleaners. Steam and ultrasonic cleaning should be avoided to keep safe and away from accidental mishappenings.

This shade is popular because of its extravagance and hue, which radiates perfectly. You can shine on with style but only needs to be a little careful while cleaning it, and you’re good to go.